A couple of week ago I was asked by a client to design a makeup look for a party theme on ‘dressed to kill’ – so of course it had to be Uncle Fester and Mortica Adams, both iconic figures and which worked especially well with the clients costumes!  I started with Francis to create Uncle Fester’s grubby white/black and grey complexion to give the effect of his character sleeping in the basement for years – and also used a deep black around the eyes blending into the cheeks for that exaggerated tired look.  Finishing with highlighted frown/cheek and mouth lines and a touch of black/grey lipstick around the mouth.

For Fiona’s Mortica Adams makeup I combined white and the lightest shade of foundation for her off-white complexion.  I then used MAC in Scene eyeshadow for an extended v shape and blended into a white and grey, finishing with liquid liner and false eyelashes.  Mortica has very strong brows so I filled these in using a black eyeshadow – and complimented this with a touch of bronzer on the cheek bones and finished with a very red lipstick in MAC Ruby Woo. 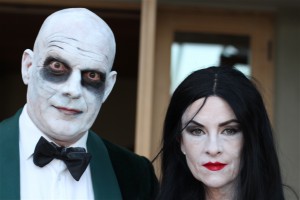 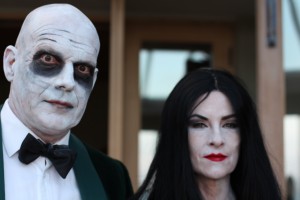