It’s no secret that Princess Eugenie is a massive fan of Bobbi Brown and Charlotte Tilbury products – with the Princess even admitting to being a bit of a pro of doing her makeup in the back of a moving car!  So it’s no surprise that these two brands seemed to have featured quite heavily in her bridal makeup look.  And like Meghan Markle, she has embraced the natural makeup look, along with using a professional makeup artist Hannah Martin.  A very sensible move.

1. The Base.  Like Meghan Markle’s bridal design in May, makeup artist Hannah Martin seems to have gone with a similar sheer foundation, allowing Eugenie’s cute freckles to appear on her nose and upper forehead.  The princess has very flawless skin, so there wasn’t a need to cover any blemishes or spots.  A good foundation for her to have used would be Giorgio Armani Luminous Silk – rumoured to have been the foundation of choice for Meghan.  I would only recommend a sheer coverage foundation if your skin is as in tip-top condition as Meghan & Eugenie’s.

2.  A lighter concealer does seemed to have been used under Eugenie’s eyes, which has been expertly blended into her foundation, along the sides of the nose and upper lip.  A brilliant concealer for brides is  Yves Saint Laurent Touche Eclat Conceal.

3.  The brows.  Eugenie appears to favour a bold brow and Hannah Martin has filled these in very neatly, yet very naturally.  I suspect a combination of a brow pencil and a little pomade may have been used here to separate the hairs and give it a bit of sticking power.  I think Martin would have used Eugenie’s favourite brand Bobbi Brown for this one, and a good pencil for her would be BB Perfectly defined long-wear brown pencil in Expresso, along with a touch of Anastasia Beverly Hills Dip-brow Pomade in Medium Brown.

4.  Cheeks.  Eugenie’s cheeks have been given a bold flush high across her cheekbones, but unlike the Duchess of Cambridge’s famous rosy cheeks these are far more subtle and genuine.  Interestingly enough, Eugenie has no bronzer – which she normally loves.  She does appear to have a touch of highlighter on the tops of her cheeks bones.  Something like Charlotte Tilbury Hollywood Beauty Light Wand would be a good option.   The blusher has also been drawn up high into the temples – a good trick which makes the blush seem to radiate from within.  A good choice here would have been Bobbi Brown blush in Desert Pink.

5.  The lips.  A very soft pink lipgloss has been used, which almost exactly match the Princess’s natural lip colour.  I wouldn’t normally recommend a lip gloss for brides, especially on a windy day which Friday most definitely was!  But Eugenie seems to have stuck to her guns and used a favourite shade.  Something similar would be Charlotte Tilbury lip lustre in Hall of Fame.

6.  The eyes.  Eugenie’s eyes were very simple with what appears to be a touch of Charlotte Tilbury’s Eyes to Mesmerise in Jean, across the lower lid.  I did notice that when she closed her eyes during the ceremony she had a slighter darker brown shade along the lash line, just above her eyeliner.  A good way to achieve this would have been to use Charlotte Tilbury The Classic eyeliner in Sophia – which has a rich copper/brown tone to it to create this illusion.  Her black eyeliner is very simple and neatly thin across the upper and lower lid (not within the waterline) and there appears to be no wing.  She may have used Charlotte Tilbury Rock ‘N’ Kohl in Bedroom Black for this.  Lastly, her mascara has been used to define every single eyelash – Eugenie’s favourite mascara is Charlotte Tilbury Legendary lashes in Volume 2 Black Vinyl.

Lastly, much like Meghan it appears as though Eugenie has opted for the more modern way of setting makeup, via a setting spray rather than powder.  A good spray to use is Urban Decay All Nighter Long Lasting Makeup Setting Spray. 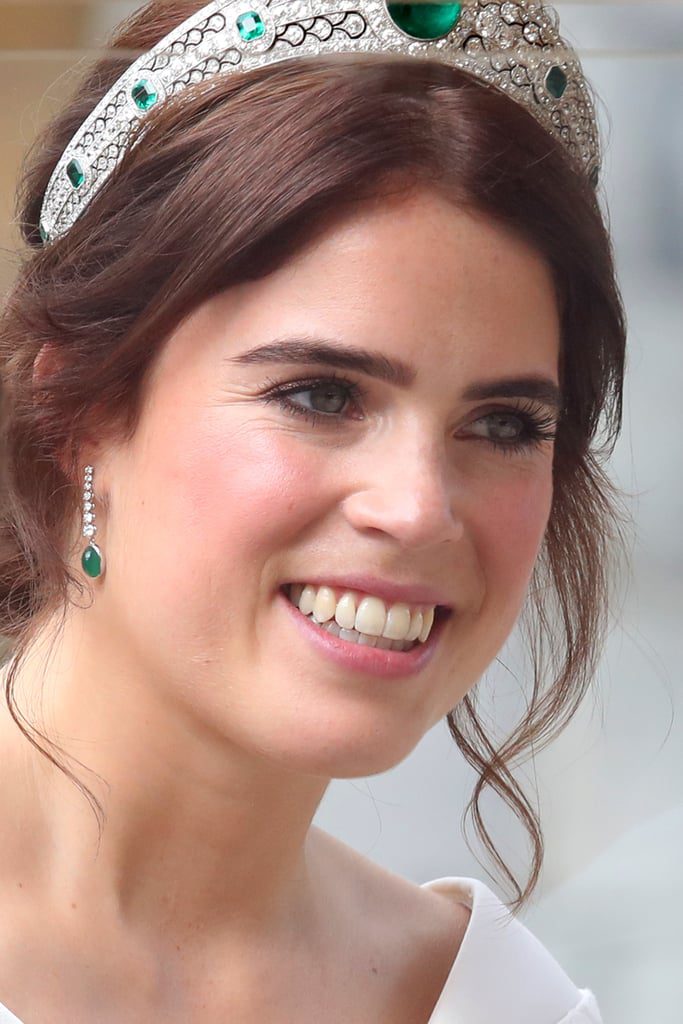