Meghan quite wisely opted for a professional makeup artist to achieve her wedding look for her big day.  So unlike Kate’s where the eyeliner and blusher were a little too strong (in my opinion) Meghan’s was a lot softer and naturally beautiful.  Just perfect for a May wedding.  Meghan used her good friend & mua Daniel Martin – who is also an ambassador for Dior Makeup.  So it is likely he mainly used Dior for her look.  I doubt it would have taken him long though as Meghan wore little to no foundation, just focusing all the attention on her eyes and brows.

So how did he do it?  Well, after studying the numerous images of the day and looking back on the footage here is my best guess as to how Daniel achieved Meghan’s look x

1. The base.  It looks as though Meghan is wearing very little to no foundation.  Instead, opting for a moisturised face that has been allowed to sink in and dry before anything else has been applied.  Daniel may have just added a little foundation to the underside of her cheeks and down the neck – perhaps using Meghan’s favourite shade in Giorgio Armani Luminous Silk.  Meghan’s freckles show very clearly down her T-Zone and across her cheeks with no harsh blending disguising her skin.  I would only recommend doing this if the skin is in very good condition, with no marks/blemishes or scars.  Meghan clearly is blessed with great skin and keeps it in an amazing condition to be able to do this.

2.  Concealer.  Daniel has added a little touch of concealer under Meghan’s eyes, but again this is very light and hardly visible.  I imagine Meghan would have kept blending this with her fingers until she was happy with the barely there coverage.  A good choice would have been  Yves Saint Laurent Touche Eclat Conceal.

3.  Meghan had a little bit of blusher on – which appeared to be more of a peach matte rather than a pink.  Daniel used only a touch of colour as I imagine he would have been concerned about the heat on the day, as it would have been hot enough that Meghan would have already of had a natural flush of colour.  A good colour match is MAC Powder Blush in Peaches.  Meghan appeared to also have a touch of a matte bronzer along the hollows of her cheek bones and below her blusher.  Providing both a subtle contour and a warmth to the face.  A good choice would have been MAC Bronzing Powder in Matte Bronze.  I noticed a very subtle touch of highlighter along the line of the nose and on the highest point of the cheeks bones – above the blusher.  This would have been taped on with fingers to blend well through.  A good highlighter to do this with is Charlotte Tilbury’s Hollywood Beauty Light Wand Highlighter.

5.  The eyes and brows.  Daniel has definitely kept to deep brown shadows on the eyes.  I think what he has done is swept over a medium to dark brown all over the lower lid, then added a slightly lighter shade all along the eye crease – this could have been done with any combination of browns from MAC, but most likely is from a Dior palette given that Daniel works for them.  He may have used the Dior 5 couleurs in 647 Undress.  Daniel has also neatly lined Meghan’s eyes using a dark brown eyeliner, keeping the line quite tight with a slight wing at the end of the eye to extend it.  He also used this pencil to dot along the bottom lash line about half way along to just give a hint of something there.  A good colour match would be Charlotte Tilbury Rock ‘N’ Kohl Eyeliner Pencil in Barbarella Brown.

I noticed when she blinked there was a glint of something else on the eyes.  I eventually worked this out to be a little of the lash glue from the individual false eyelashes placed on the corners of the eyes, after a healthy dose of mascara had been added.  Diorshow Iconic High Definition Lash Curler Mascara in 090 Black would be a good choice for her.  The mascara was also placed on the lower eyelashes, but again very subtly.

Her brows were very healthy filled in, but I noticed one side was slightly better than the other in terms of balance.  From looking at the images I think a pomade was used rather than a pencil – this would have meant the brows would have stayed in placed a bit more with less movement.  Something like Anastasia Beverly Hills Dipbrow Pomade in Dark Brown.

6.  Her lips were the softest of pink shades, with her lovely lip freckles still peeking through.  The formula used doesn’t seem to be matte but more of a sheen, like a balm not a gloss.  It also appears to have been taped in with a finger to blend it thoroughly through the lip.  It was most likely Dior Addict Lip Glow Color Reviving Lip Balm in 001 Pink / Glow.

Lastly, Meghan doesn’t seemed to have used any powder on the face at all – which is a very modern approach to makeup and something which I very much favour.  Instead, she may have got Daniel to simply set her makeup using a setting spray such as Urban Decay’s All Nighter Setting Spray.

Nails – Meghan kept her nails short and natural like Kate’s 6 years before.  The shade used was Essie in Mademoiselle.

As for the tiara, it’s been confirmed to be Queen Mary’s diamond bandeau tiara on loan from Queen Elizabeth. The diamond bandeau was made in 1932, with the entire brooch dating from 1893, according to a statement released by Kensington Palace. 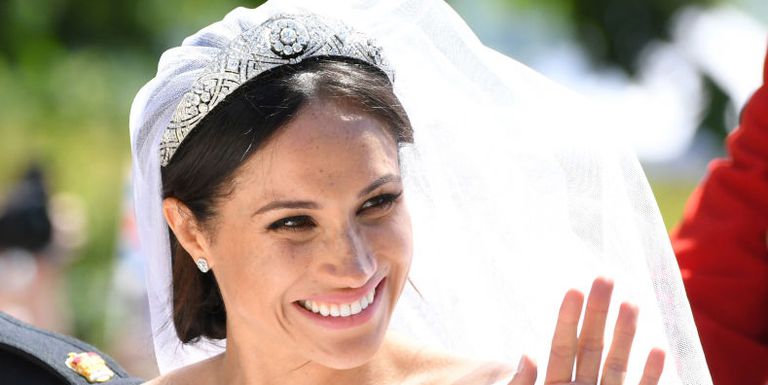